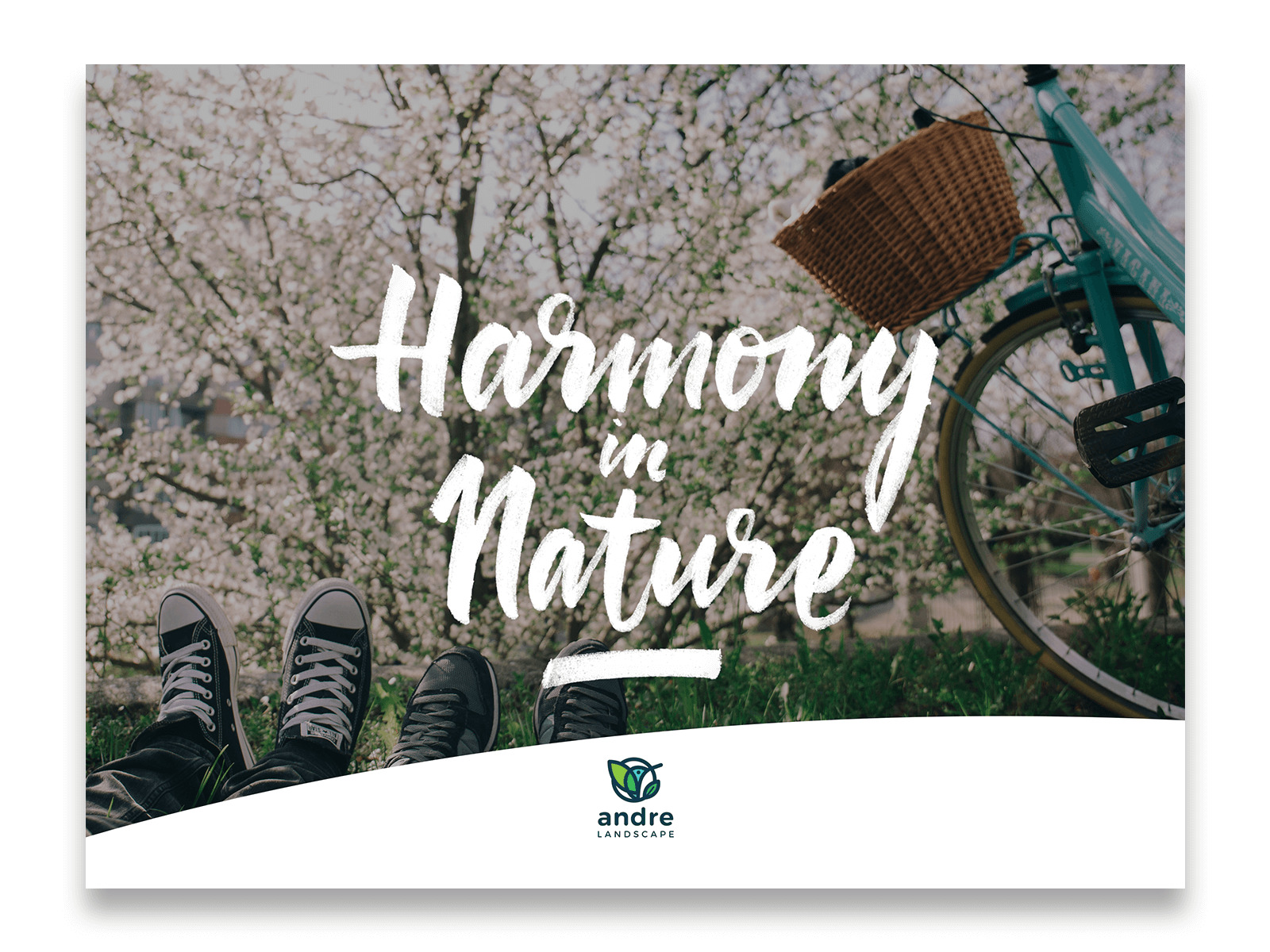 Branding is never about just visual perception or verbal message. Branding is about the whole image people get hearing the name of a company or seeing its brand identity signs. So, designing the signs and symbols which make a brand recognizable and transferring the appropriate message is a job with great responsibility. Still, there is one more stage of the process when this sort of responsibility gets another shade. It happens at the point of branding redesign.

We have already published case studies with the stories of creating logos and brand identity concepts at the early stages of their business path. However, this time the story will have another flavor as we are presenting you the case of logo redesign for a company that is already recognized and actively operating on the market. The task for Tubik team was to create the new brand identity not breaking already gained links and associations.

Redesign of a logo and creating the corporate identity for a commercial and holistic landscape firm Andre operating in landscape maintenance, tree care and design.

First of all, it was important for the designer to study the conditions and philosophy of existing logo functionality, details about company activities and business goals and customer’s wishes about the redesign process. It should be mentioned that redesign for existing companies and products can have different levels of breakaway from the existing versions: some companies decide upon fully new design which has nothing in common with the current branding, while others keep the track of changes carefully and gradually, with minor alterations eliminating the risk of losing recognizability on the market.

The second approach was taken as a basis for this particular story because Andre is a company that has already won its audience on the market. That means any design change should be done with respect to the company’s history and philosophy as well as brand image grown through the years. Therefore, new design had to take its roots from the existing branding, but offer some refreshment and add some trend.

Certainly, to find the sign representing the brand, the designer needs to know as much as possible about the brand, its business goals and statement. Andre is a medium-sized company based in the USA and providing all sorts of services linked to landscape care and design of any complexity. The company is family-owned so its name origins from the last name of the family. The customers wanted a new logo to be quite classic, memorable, enduring and setting the strong association with land care. So, it was important initially to provide the visual sign that will instantly inform observers about the nature of the business and create positive vibes via the harmonic combination of shapes and colors.

After the market research and getting deep into the requirements and background of the company, the designer worked over the first series of sketches and offered the first version for the redesign. It was based on the round shape and featured green leaves as the central element of the composition. The designer also selected the corresponding version for the name lettering so that it looked readable and harmonic in combination with the image, supporting it but not overloading general visual presentation. The combination of several shades of green with light-blue set the image connected to key concepts of business activities: nature, landscape, plants, trees, sky. The designer applied smooth and rounded lines of different stroke weight and provided the variants filled with color as well as glyph one.

Another concept offered more linear and geometric variant also featuring the leaf motif and using a shape inside reflecting the form of capital A letter.

Although the offered style was appropriate, the customers insisted on applying the mascot in the logo image. The choice was made in favor of a bird and the designer offered the graphic option featuring the bird as a logo image. It also was applying the form of the leaf in the image used separately, but in combination with lettering, the leaf was placed closer to the letters.

One variant of a logo featuring the bird mascot used the image with the shorter beak and an eye featuring the mimic expression of the smile.

The idea of “smiling” positive expression was also tried in the variant in which the bird was inscribed into the circle. The beak directed upwards moved out of the circle setting the feeling of progressive flight, while the wing featured the form and visual marks of the leaf.

The general concept of applying the bird in the logo was set and agreed upon, but the customer and the designer decided on trying another iteration experimenting on simplification of the bird’s silhouette to make the logo not only attractive and meaningful but also clearly visible and legible in any size. This stage of creative search resulted in a new shape combining the visual concept of a bird and of a leaf in one image.

The final choice was made in this direction, which efficiently presented the mascot in clear simple forms, preserved color combination associated with the nature of the offered services and vibes of green and natural background.

Now let’s continue this story to unveil the further process of applying the logo and chosen the stylistic approach for the set of branded items presenting general corporate identity of the brand.

On the basis of this stylistic approach, the designer developed several variations applying the same color palette, typography, mascot and general visual perception for building the consistent and harmonic corporate style presented via different visual details on branded items. For all of them, three core visual elements supported the consistency of performance: the mascot showing the cute hummingbird, green leaves instantly associated with trees and plants and the lettering showing the brand name of the company.

The first item to get into the set was a business card. No wonder: in the modern world, the business cards is not a sort of fashion, but a must-have for serious branding and business communication, especially in the domain of services. It is the real sign of respect to the customer. So, it should be not only informative but also stylish and easily readable. The designer provided two options of placement, horizontal and vertical, to set higher level of flexibility for possible goals and wishes that company can have in the future. 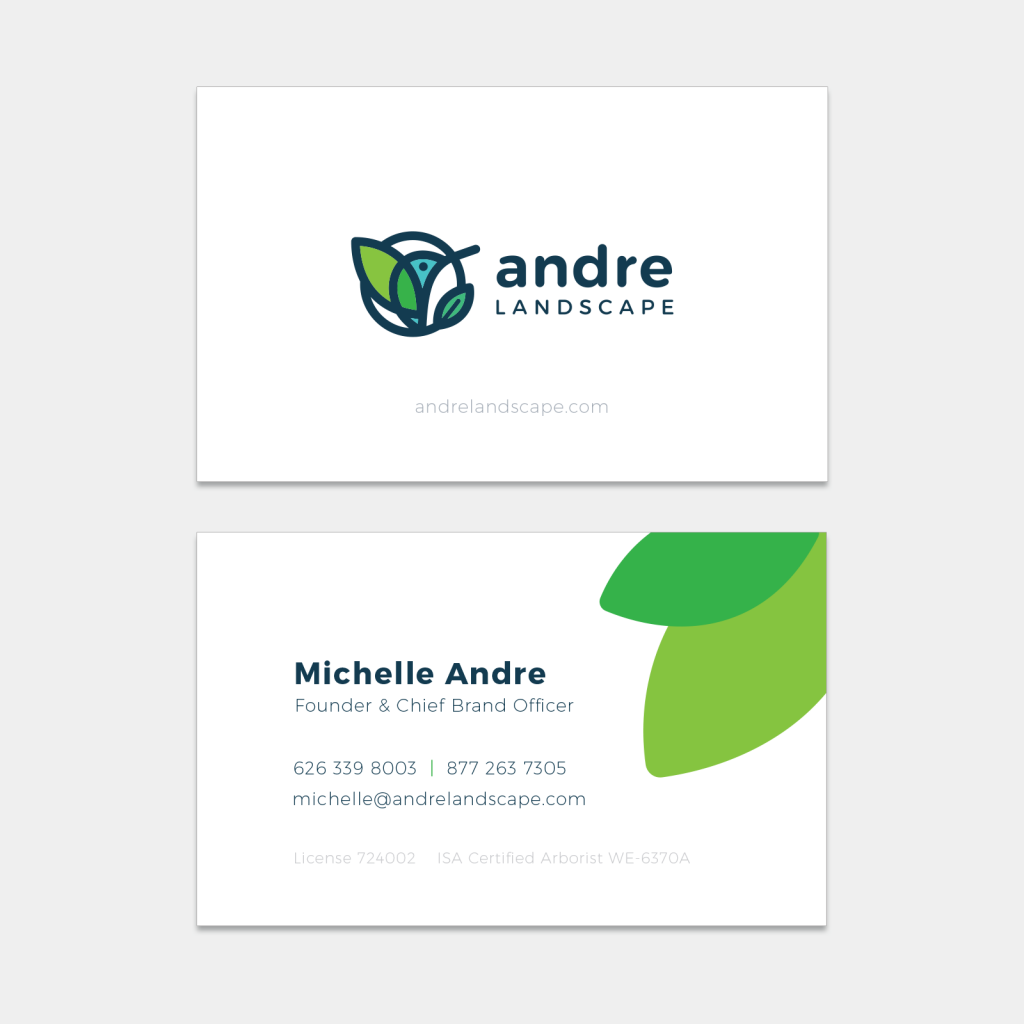 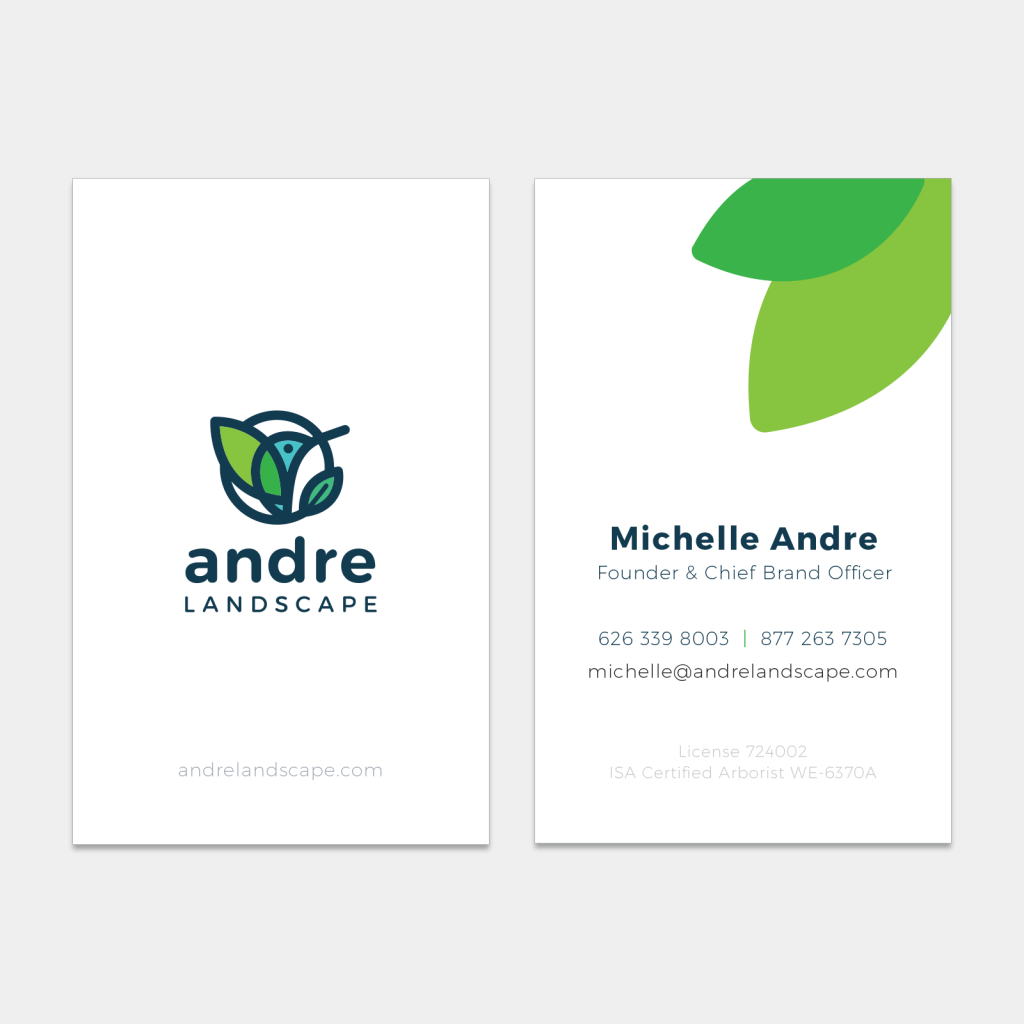 The next object of design exploration was branding for corporate vehicles. The company uses several options of vehicles which regularly do considerable business routes, therefore, neglecting such an effective advertising carrier would be unreasonable. So, the designer worked over the variants of harmonic placement of catchy and stylish branding elements for different models of vehicles. 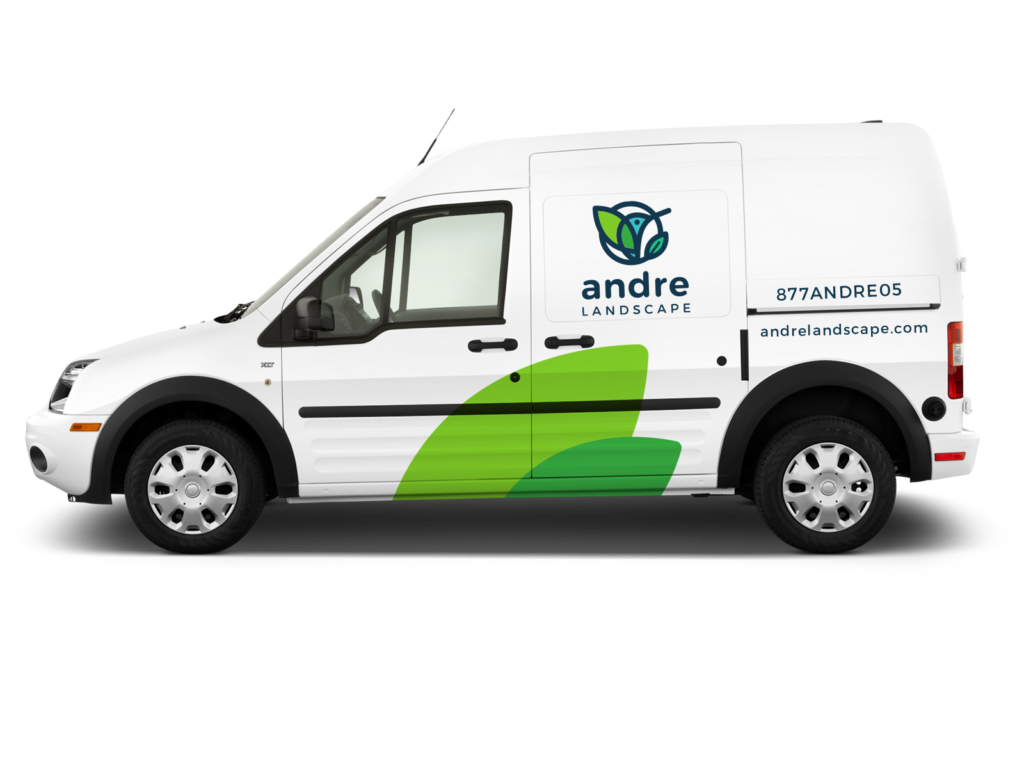 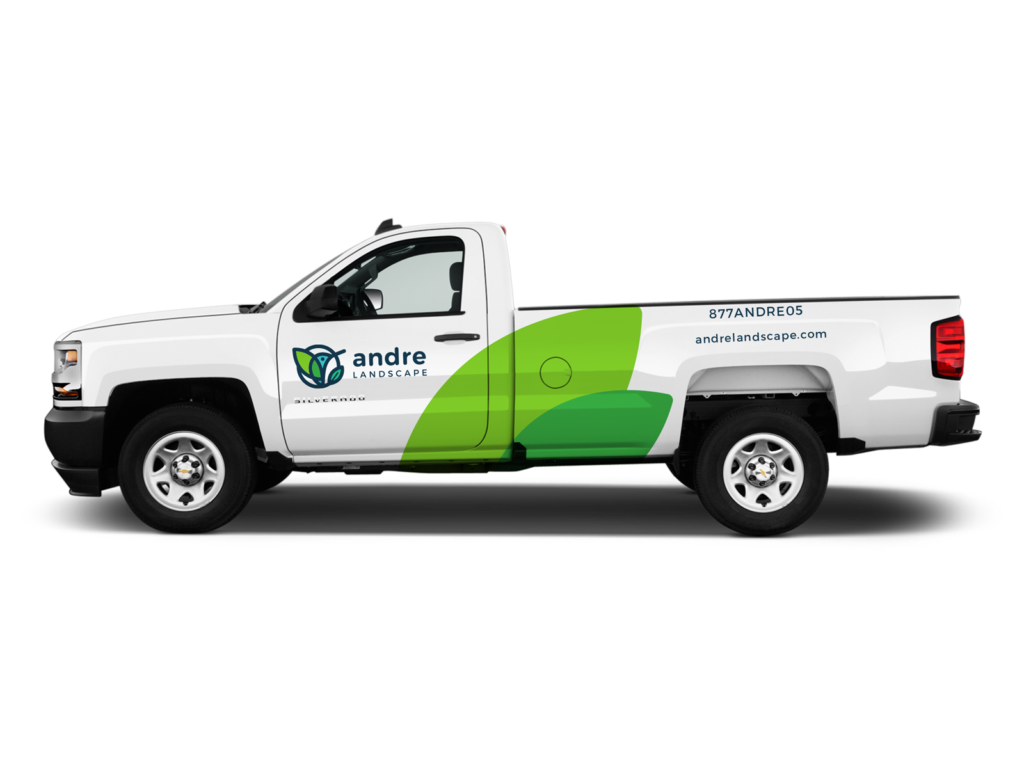 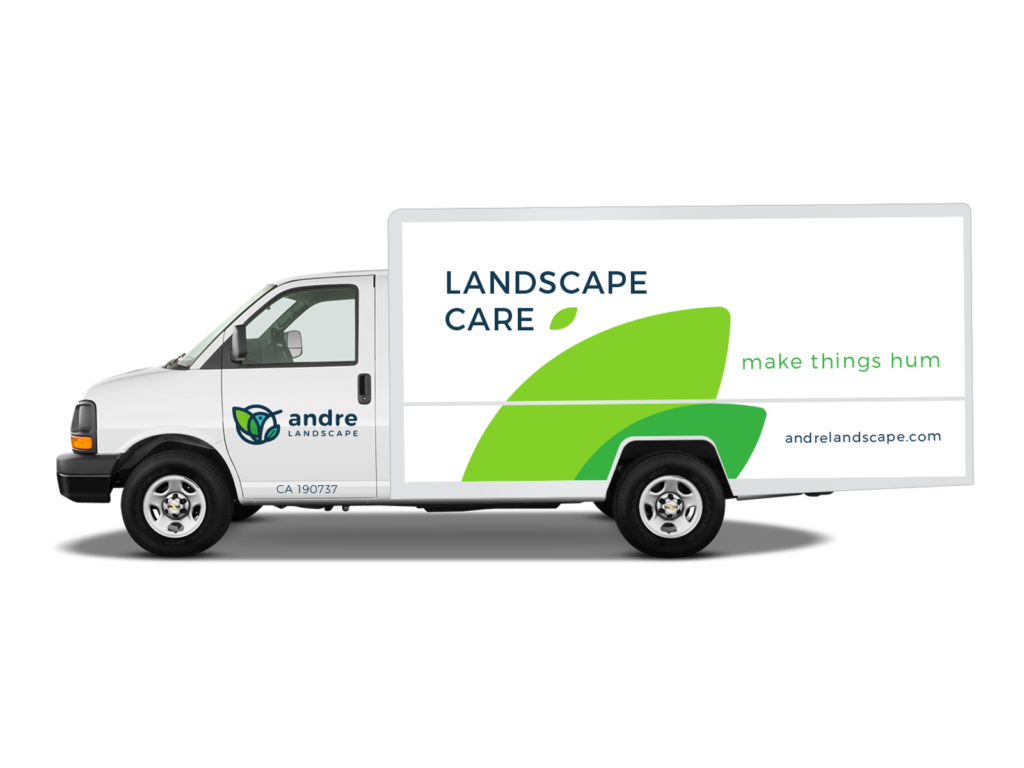 Light background provided effective combination with the green palette of identity design presentation and set the high level of visibility and readability, important for this method of advertising.

One more direction of corporate branding for Andre company had to deal with correspondence, both physical and digital. In this field, letterhead and envelope were created for physical letters and also the special template featuring branding signs was designed for corporate emails. 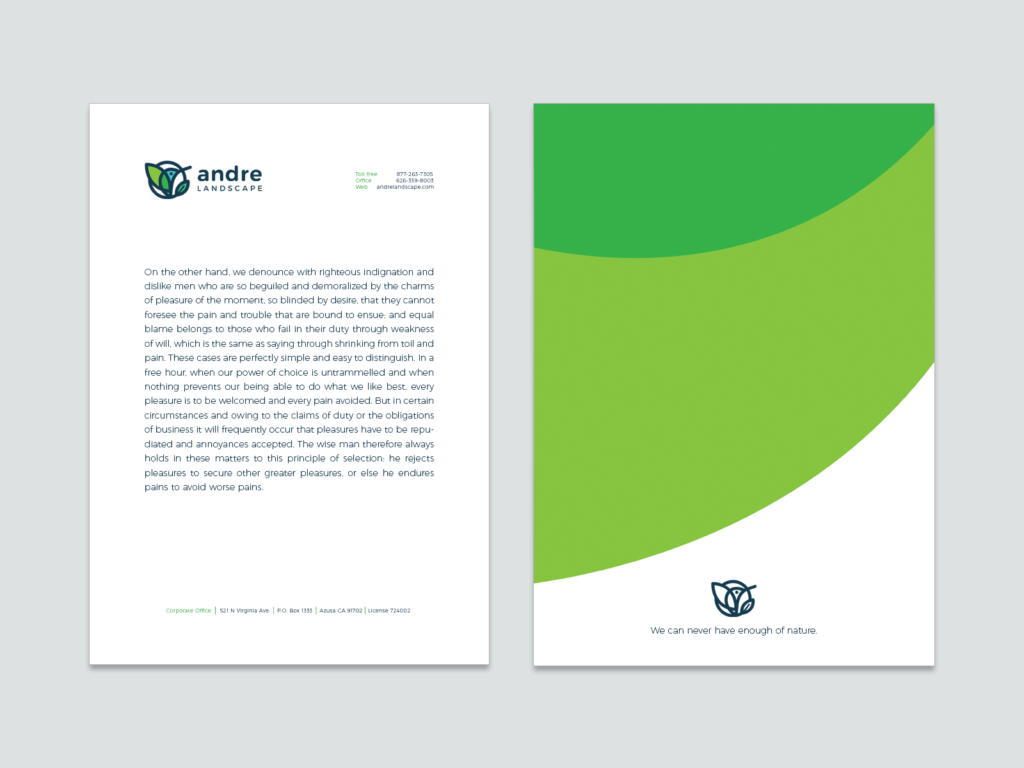 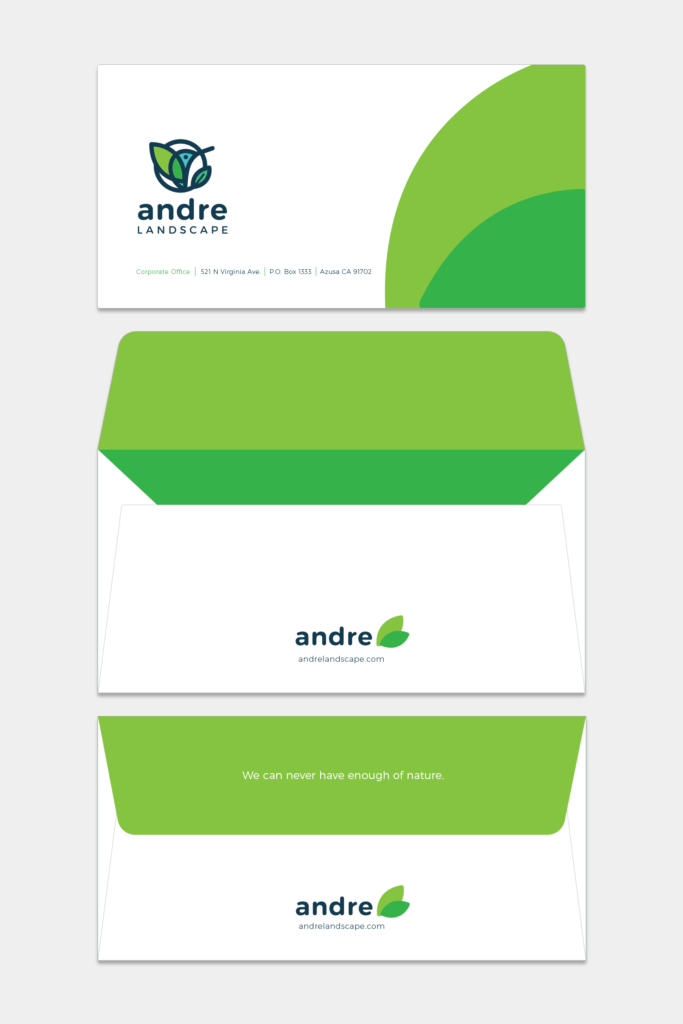 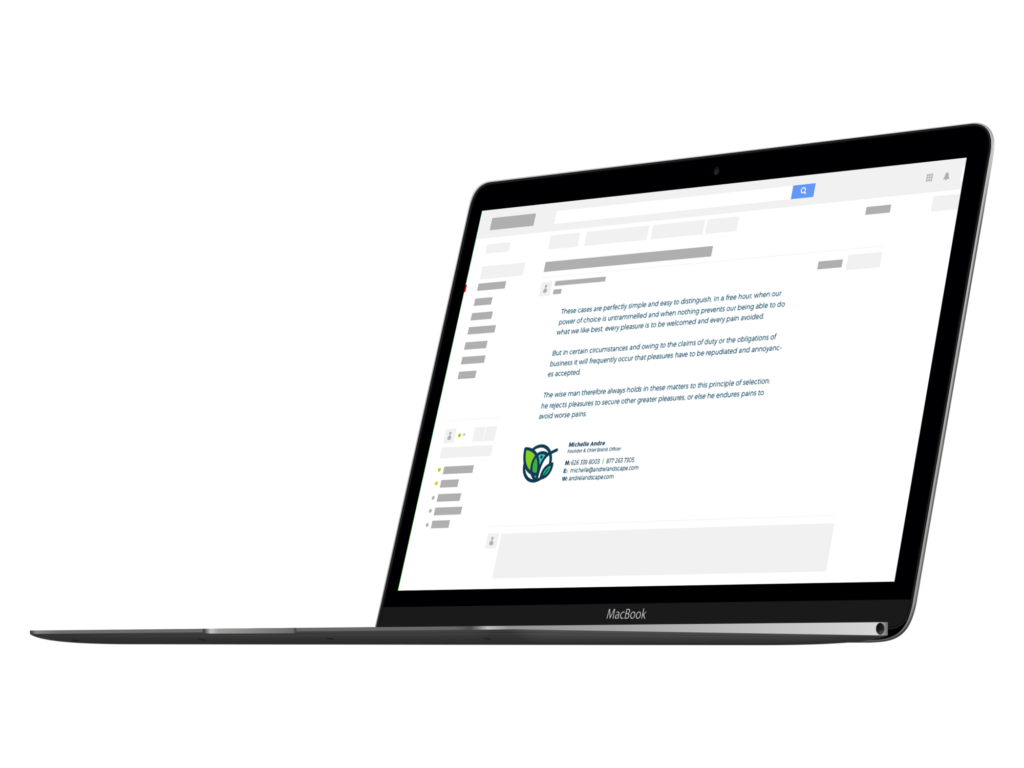 No secret that branding is not only about the logo and brand name but also general style of visual components dealing with the brand, such as photos for websites and blog posts, banners of all kinds, posters and so on. One of the design tasks was to create the banner for an indoor trade show. For it, the designer created unique hand-made letting for the slogan copy to add originality for general visual perception and setting the strong emotional associations with a brand. 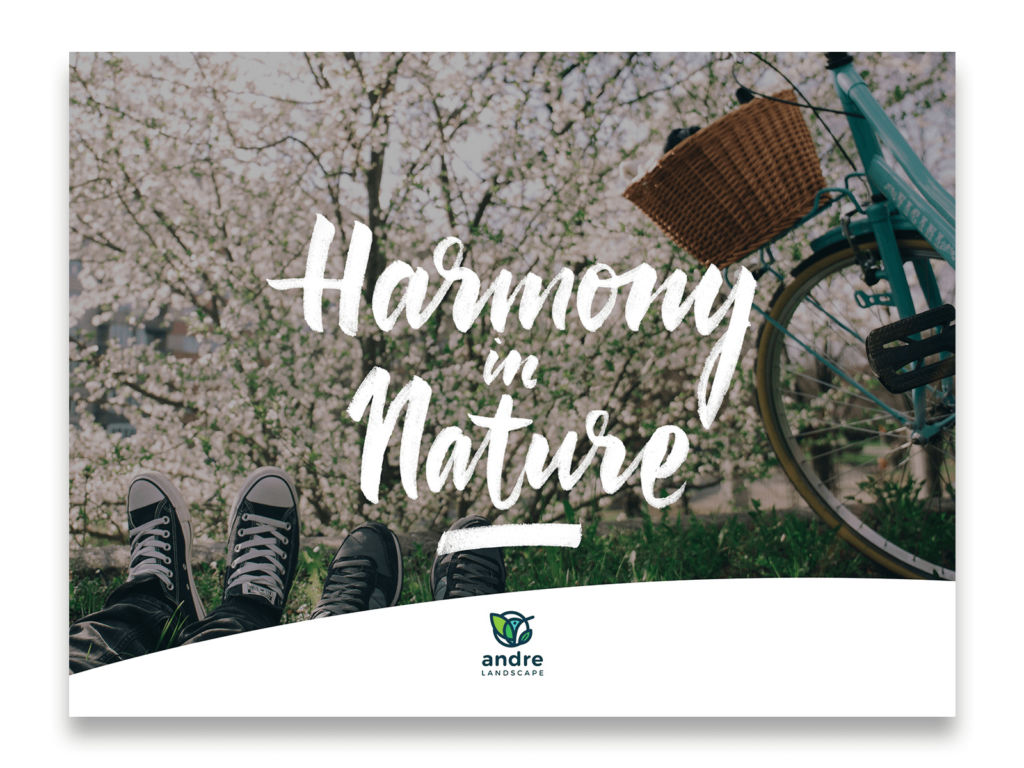 Another object of design was a jar for candies or other stuff of this sort. The concept below shows the monochrome design with high level of readability which could efficiently work for the objects of this kind. 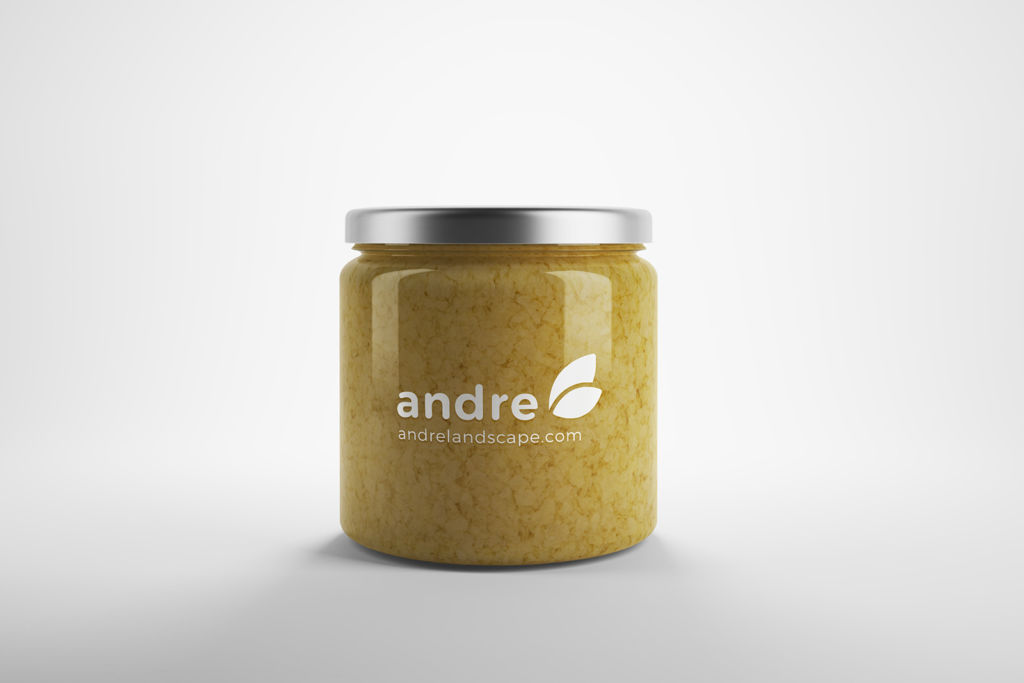 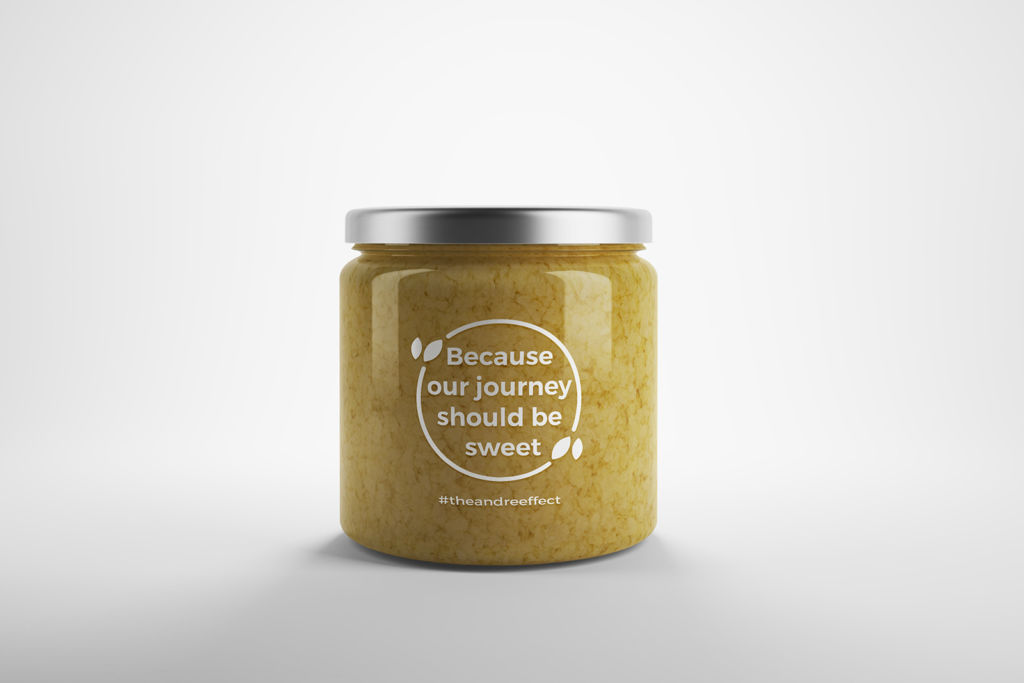 One more task for the designer was certainly connected with corporate T-shirts which could be effectively used as another nice and natural carrier of information enhancing brand recognizability and awareness. Again, the designer chose the light background as the basis providing the airy and universal solution to the fast and clear presentation of the logo. Still, other variants featuring different color combinations and visual elements placement were offered to the set so that they could be used for a variety of purposes in advertising campaigns and everyday brand presentation. 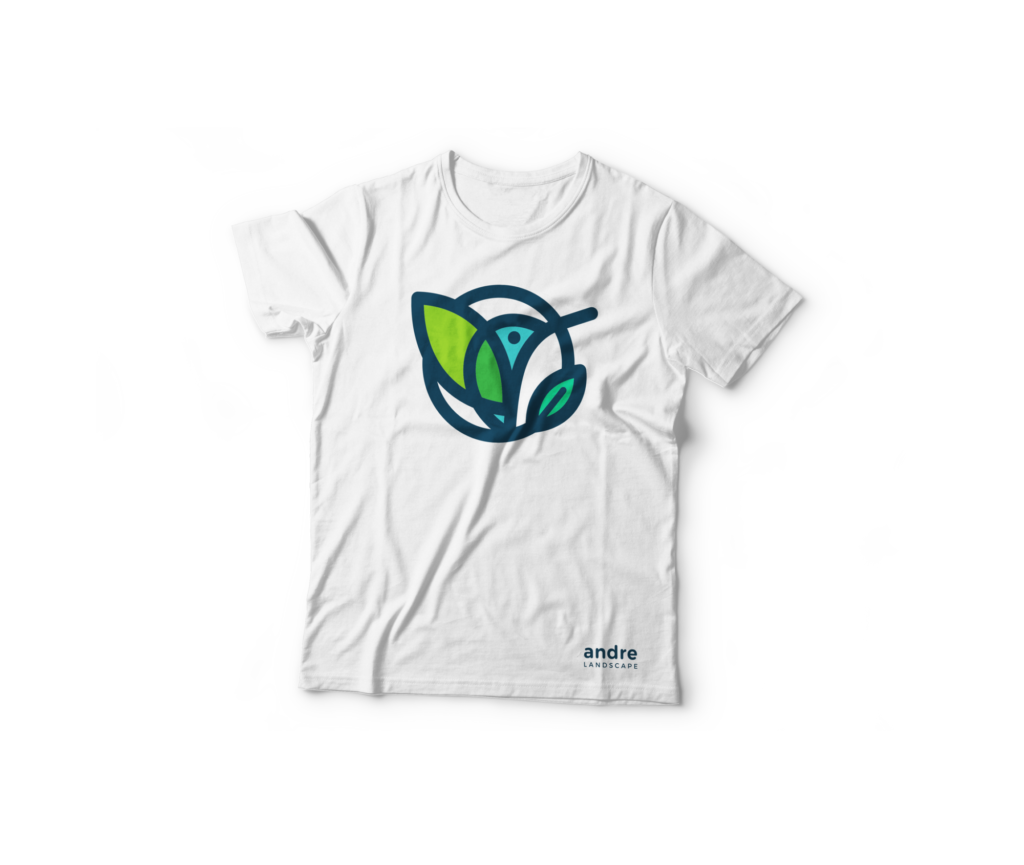 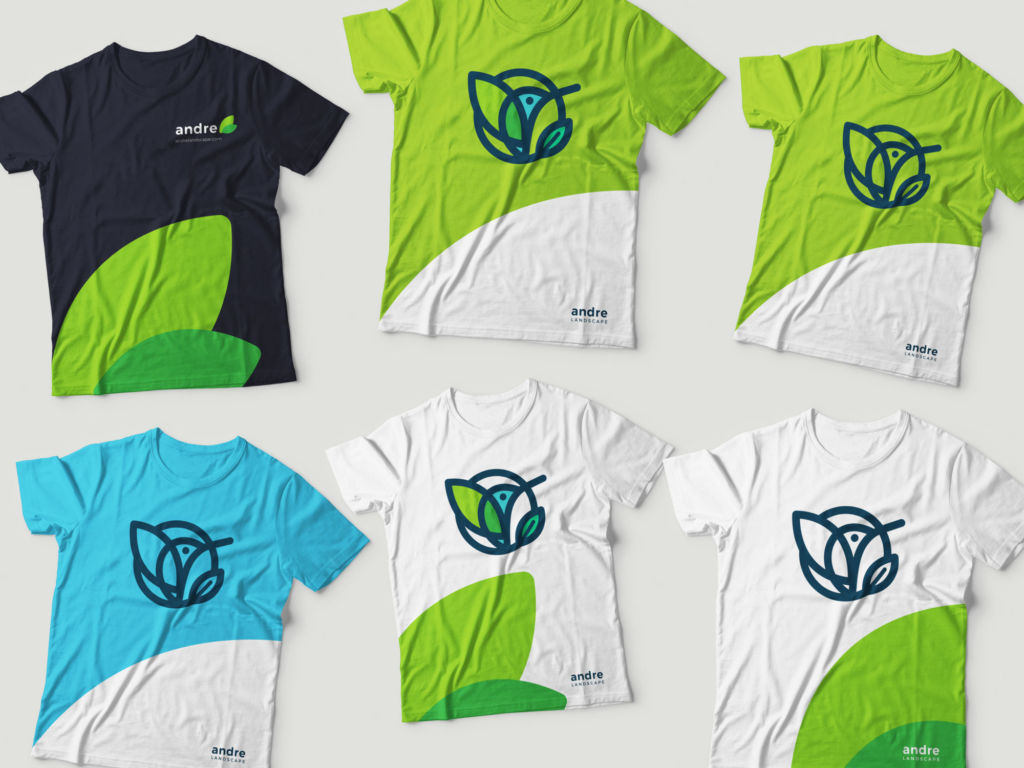 On the basis of all the design solutions, the clients got the brand guidelines setting all the details of designed solution as well as wrong variants of using the logo that could harm the perception of the brand image.

This case of comprehensive design of corporate identity has become another proof that user research, market research, thorough attention to the customer’s requirements and inspired creative search together make a great basis for efficient, informative and attractive branding.

If you want to know more about creative stages of the design process for logos, welcome to read our free e-book Logo Design.