“Cinematography is a writing with images in movement and with sounds.” (Robert Bresson)

When the first videotape appeared, people said the cinema is going to lose a fortune. Later, when the home cinema came, they said that movie theatres will be doomed. None of this truly came into being. Cinemas have their special atmosphere with the odor of popcorn and large screens the reason why watching films at home hardly ever replace going to a movie.

The cinema industry strives to improve its service system to encourage loyal customers. One of the solutions they provide is cinema applications. They are handy assistants that give movie lovers an opportunity to find the necessary data and book or buy tickets online. This way people can avoid standing in a long queue and be sure they get the best seats.

UI and UX design for cinema apps requires attention to the details. Applications need to be fast and clear to use so that movie fans could easily accomplish the tasks they come for. In addition, designers pay deep attention to the screen presenting the seats. UI elements should be created that way so users could tap them without having difficulties and choose the seats properly.

Cinema apps are common in digital markets that’s why UI/UX designers often receive this kind of project. There are no strict rules on how to create a layout for those apps. The major task is to make clear navigation and interactions systems as well as present the information in the best way for users’ perception.

New D4U post presents a collection of diverse cinema app UI designs. There are both mobile and desktop versions showing how the same screens can be interpreted. Enjoy!

By By Mario Sestak 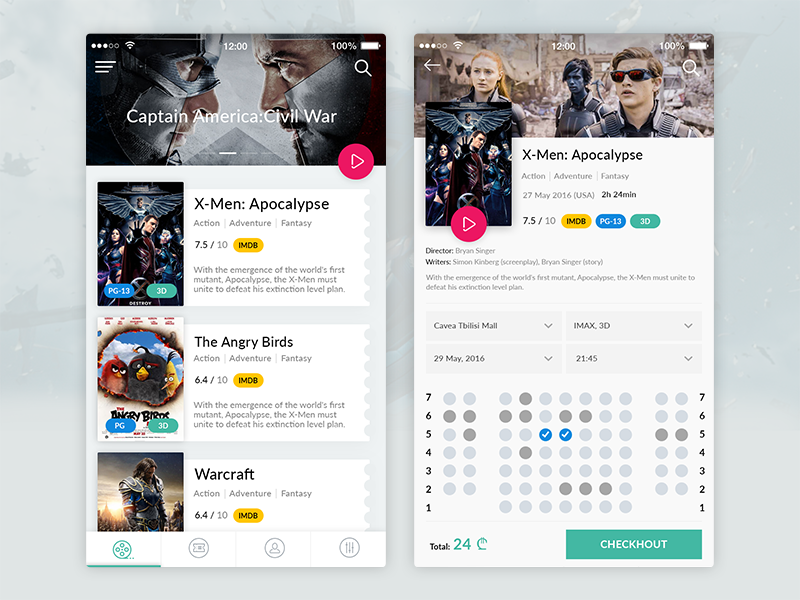 You may also like the collections of ecommerce app designs, finance apps, web designs for events, creative logo designs, UI concepts for education, and other D4U Inspiration posts