“Festivals are fun for kids, fun for parents and offer a welcome break from the stresses of the nuclear family. The sheer quantities of people make life easier: loads of adults for the adults to talk to and loads of kids for the kids to play with.” Tom Hodgkinson

China joined in celebrating January 1 as New Year’s Day more than a century ago, but the traditional Chinese New Year, also known as Spring Festival, remains the brightest national holiday. For Chinese people, it is the time to bring a family together and relax from work, while for a tourist, Spring Festival is an opportunity to visit one of the most ceremonious and colorful events in the world. Today many countries hold various festivities and parades to celebrate Chinese New Year. The biggest celebration out of China borders takes place in the US, in San Francisco, to be more specific. The famous district called Chinatown transforms via decorations and it’s easy to forget that you’re still in America.

The unforgettable atmosphere of Chinese New Year has inspired many artists and designers to create loads of artworks dedicated to this holiday. Now, when Chinese New Year is at the height of celebration, we’ve decided to devote the fresh issue of D4U Inspiration to the blossoming holiday which hopefully brings you the inspiration.

A bit of history and traditions

Chinese New Year holiday appeared centuries ago. According to the tales and legends, there was a mythical beast called Nian (Chinese word for “year”). At the end of every year, it appeared in villages and attacked folks. One day, to defend the village one man decided to meet the beast holding red papers up and using firecrackers. The monster ran away and never got back. Villagers understood that Nien was afraid of red color and loud noises, and after that, they held the noisy and colorful festival at the end of every year to scare evil spirits away.

Today, it’s the most expected public holiday in China which is full of traditions. The celebration of Chinese New Year lasts for 15 days. Before the holidays start, the Chinese thoroughly clean their houses and decorate them with traditional red items. The red color is believed to be a color of happiness and good luck.

The festivities traditionally start in the evening preceding the first New Year Day. Families have a reunion dinner at home. Traditional dishes are fish and dumplings (a dish consisting of small pieces of dough made from a variety of starch sources, often wrapped around a filling similar to wontons), which are said to signify prosperity. Traditionally, adult family members give red envelopes with cash to children during the dinner: they believe it will keep them healthy and give them a long life. In the modern world, the tradition has been a bit interpreted: for example, some youngsters send money in virtual red envelopes to each other via mobile applications just for fun.

Chinese people celebrate the Spring Festival not only at home with the families but also publicly, through loads of cultural activities such as firework displays and dragon dances. Fireworks are used to scare away the evil spirits from China. Dragon dances are common during Chinese New Year. Depending on the part of the country, folks dressed up in the big dragon or lion costume dance to deafening drum beats with the view to evicting bad spirits and demons away.

The 15th day called Lanterns Festival marks the end of the Chinese New Year celebrations. Chinese families walk down the streets carrying lit lanterns of different shapes and colors. Recently, it was commercialized as well as St Valentine’s Day symbolizing the time when single people can find their love.

We’ve searched for various artworks devoted to Chinese New Year and here are some of them to make you feel the spirit of the coming holiday. 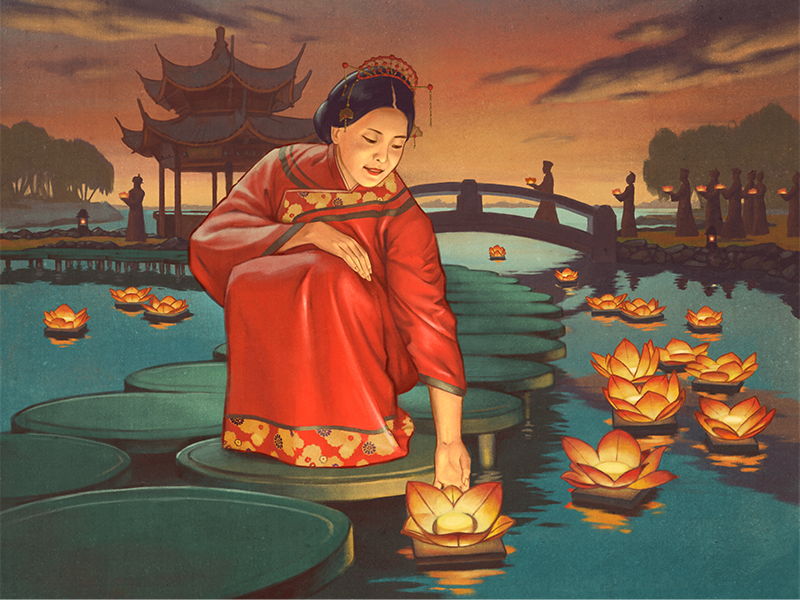 If you don’t want to miss the fresh collections and posts for your inspiration, join the friendly community of our subscribers and get the updates immediately in your inbox. Stay tuned and have a bright successful year!